The corporate “graffiti” thing has been cracking me up for awhile now … you know the street advertisements for things like Hummers that are made to look like graffiti. Taking it to a whole new level is the new branch of North Fork Bank at the corner of 2nd Ave. and E. 10th Street. I noticed it a couple months ago when the branch was under construction: “graffiti” inside the bank, underneath the teller windows.

We think of the last five years as a unique time in the New York real estate market, but in fact, it is a very old story.

The Story of New York House was first published in serial form in Scribner’s magazine in 1887. It is a lovely bit of historical fiction (although that term wasn’t yet coined), which begins in 1807 and takes place over several decades. The story, or allegory, is about the inexorable march of development followed by decline and finally transformation.

It was written by H.C. Bunner, a prolific urban journalist, fiction writer and editor who lived and worked in New York City almost his entire life but has been all but forgotten. He was the long-time editor of Puck magazine (which gave the Puck building at the corner of Houston and Lafayette its moniker). Puck was one of the earliest humor magazines and had a major influence not only on that genre, but on cartooning as well. It was one of the first magazines to use color illustrations that lampooned politicians and the bourgeoisie. Below is an illustration drawn by the magazine’s publisher, Joseph Keppler, whose name is more associated with the magazine’s than Bunner’s (to see more Puck prints and posters, click here). The fat cats (pictured below) are in color and are casting shadows of the poor and decrepit behind them.

END_OF_DOCUMENT_TOKEN_TO_BE_REPLACED

I happened to be in Central Park at sunset on Saturday evening and had my new digital camera with me (click to enlarge). 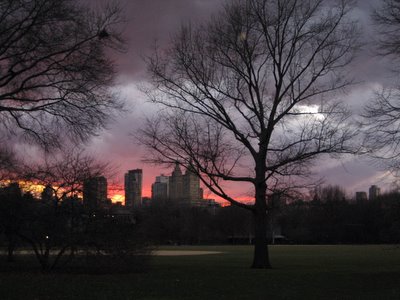